In MapillaryJS, we render manually created and segmented polygons and fill them with colors with the help of polygon triangulation.

Note that at Mapillary, we often talk about triangulation related to positioning map features on the map. But polygon triangulation is a different thing. It's a technique in computational geometry that helps create simplified 3D models (meshes) of objects and is often used in geometric modeling and computer graphics. And at Mapillary, as mentioned, we use it to help visualize semantic segmentation in the 3D representation of the world that you see through the Mapillary viewer.

While it's fairly easy to create meshes of shapes on a plane in two dimensions, such as in regular images, it's considerably more complex for spheres—which we use to render panoramic images. And that is a challenge we at Mapillary need to tackle, as there is a considerable amount of 360° imagery on the Mapillary platform. So let's take a look at how we've worked out a solution.

Start with the Vocabulary#

Before explaining the challenging aspects of triangulation on the sphere, the topic for this post, let's first define a vocabulary: 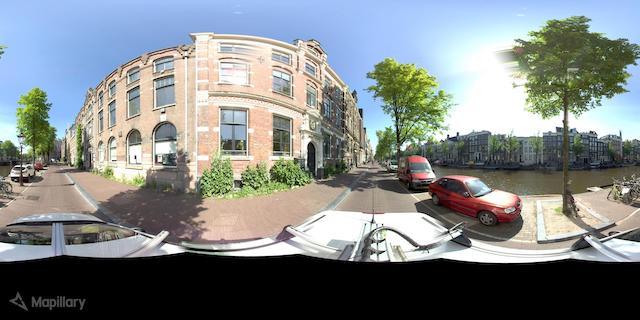 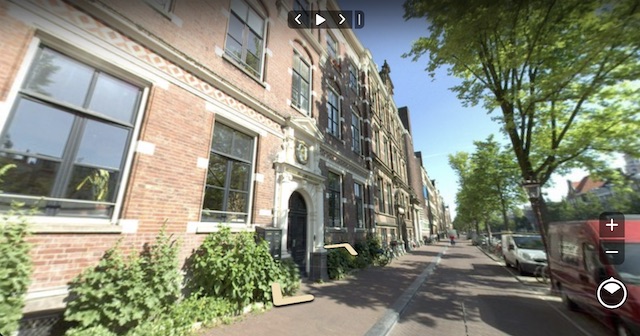 The image segment visualizations in MapillaryJS are filled with different colors based on the segmentation class. The fill originates from a colored 3D mesh that is placed in front of the image, or inside the image sphere in the case of a panorama, in the undistorted 3D space in the MapillaryJS viewer. 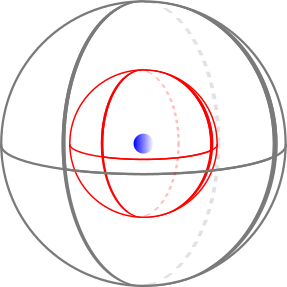 The image segment is defined by a polygon on the distorted 2D projection. This polygon needs to be triangulated, i.e. divided into a set of triangles, to create the mesh mentioned above.

While it's fairly straightforward to create this mesh through triangulation for regular images, it's more complicated for equirectangular 360° panoramas because of their spherical nature. The relations between the polygon vertices (the corners of polygons) change when undistorting from the equirectangular projection.

Besides solving the actual triangulation, we also need a method that is performant because we may need to triangulate hundreds of polygons with thousands of vertices for a single image. We need to perform the triangulation while keeping the MapillaryJS viewer as responsive as possible.

An example of what we want to achieve can be seen in the figures below. A simple hexgonal polygon has been segmented on an equirectangular 360° panorama. We want to be able to render it filled with a color in the undistorted 3D space. 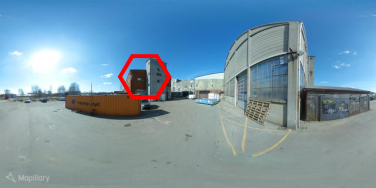 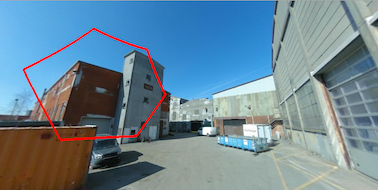 It is not possible to project all the points on the sphere to a single plane, some points will end up behind the plane.

Perspectively projecting points to a plane: the red sphere can be projected because it is in front of the plane while the grey sphere cannot because it is behind the blue camera position with respect to the plane

Therefore, we have to divide the distorted 2D projecton into a number of subareas that are small enough so that all points will end up in front of a chosen plane. Let us divide the image into a grid that ensures that no subarea covers more than 180 degrees. If we choose a grid of 2 x 3 rectangular subareas, no subarea covers more that 120 degrees on the sphere. After dividing the image, we can divide the triangulation problem into six subproblems by clipping the polygon in each subarea. In our case, we get three clipped polygon parts related to the subareas containing the polygon.

The polygon clipped to each subarea

After clipping the polygon, we can unproject it to the sphere and then immediately project it to a plane with the normal in the direction of the center of the grid rectangle to ensure that all points are in front of the plane. 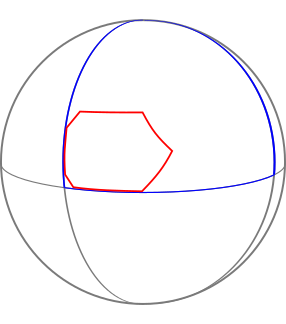 Once projected, we can now triangulate the clipped polygon and then fill the triangles with color.

If we now assemble all the triangles from the different subareas, we have our completed triangulation. We can render the polygon with fill in undistorted 3D space. 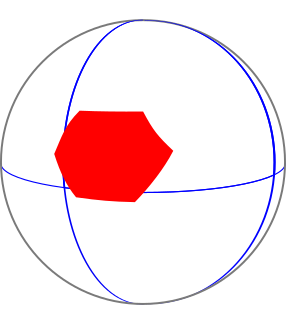 Below is a simplified pseudo-algorithm for triangulating a polygon on the sphere:

The end result can be seen below. 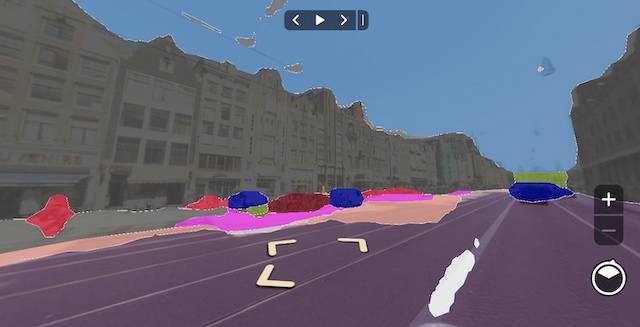 Rendering segmentation polygons with fill in an equirectangular 360° panorama

With our practical and performant approach to triangulate polygons defined on the sphere, we can visualize segmentations detected on equirectangular panoramas in a better way by rendering polygons on the sphere with fill. We do it by dividing the spherical triangulation problem into smaller subproblems that are simpler to solve. Then we combine the results from each subproblem into the final solution.